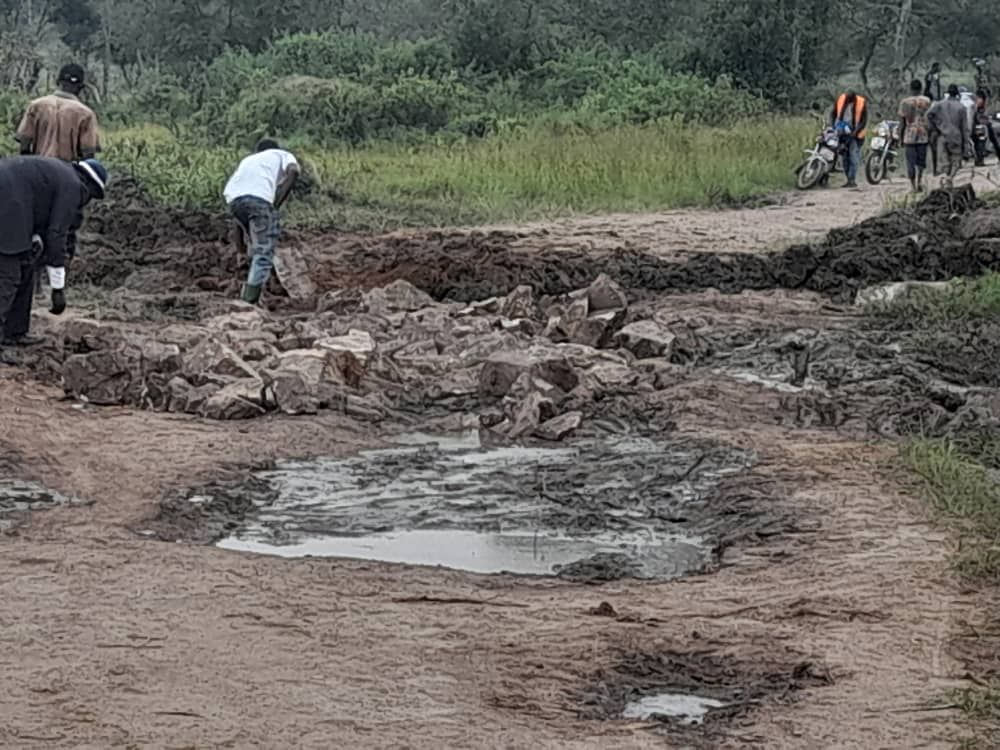 Kazo: Residents of Kanoni accuse district leadership of failure to work on roads

Residents of Rwemengo and Mbogo parishes in Kanoni Sub-county, Kazo district have started working on their 8km community access road, which has been in a sorry state for over 15years.

The residents secured permission from Kazo district local government to work on the road through the mobilization of Chairman LC II, Lay Canon Edward Kibwenga, together with their community work chairperson, Tumwine David Tumushabe with funding from Francis Rumoma, one of the area residents.

Over 30 residents and boda boda riders volunteered to carry the stones, pave water runways and level the road on behalf of the district.

Lay Canon Edward Kibwenga, the chairman LC II Rwemengo parish, said that after heavy rains destroyed the road, making it impossible for people and vehicles to move, they have been reporting about its sorry state to the district officials who promised to work on it after the rains, all in vain.

Kibwenga added that after a long wait they were able to mobilize for culverts and tractors from the one Francis which helped them to do the work successfully.

A section of residents led by Chairman Boda Boda, Kanoni Sub-county told our reporter that this road has become a spot for many accidents because of the many gullies that have filled the road since it was last rehabilitated 10 years ago.

The residents requested the Government to complete the community access roads by putting culverts since they have opened the roads.

Tumwine David Tumushabe, resident and chairperson of community work attributed the failure to work on the roads to district officials for neglecting the area.

Tumushabe said the roads were last rehabilitated when it was still Kiruhura district.