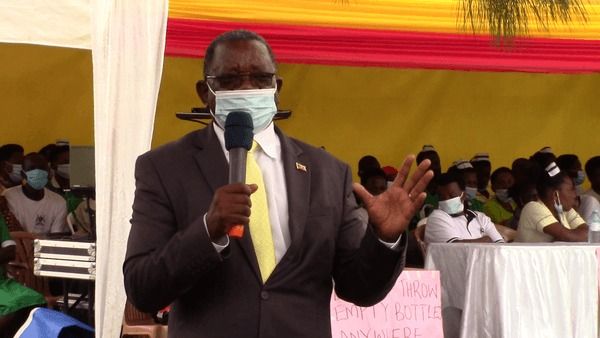 Prof. Elijah Dickens Mushemeza, the Member of Parliament Sheema South Constituency has told teachers to stop the tendency of disturbing the President and government with demands to increase their salaries stressing that they are poor and needy and should patiently wait until government answers them.

Prof Mushemeza made the remarks during his address at Kitagata town council headquarters at a function to raise awareness about Malaria in Sheema Sub-County on Monday, where he said that most teachers have failed to know themselves that they are poor and needy and resorted to making noise that won’t help them.

‘’You teachers, its true President Museveni promised to increase your salaries but we are still in economic crisis and these things of putting President on pressure won’t work for you. By the way let me tell you open truth, those who need teaching jobs are as many as I can say, we have so many professional teachers, if you strike, we shall chase you all and employ those who need jobs” said Mushemeza.

Prof Mushemeza further intimidated teachers saying teachers that it is very hard for a poor person to make a successful strike and that whoever strikes again, he or she will be chased.

“I want to assure you in a broad day light that you can’t afford strikes. First of all you’re poor, needy and vulnerable, you can’t strike and you spend even three days at home not working,” he added.

Prof Mushemeza was a lecturer at Ankole Western University before he joined Parliament to represent people of Sheema south as an independent candidate.

During the same address, Prof Mushemeza told residents of Sheema that they should get used to the current high prices of commodities saying that it’s just the beginning adding that in a few coming months, the situation is likely to be worse.