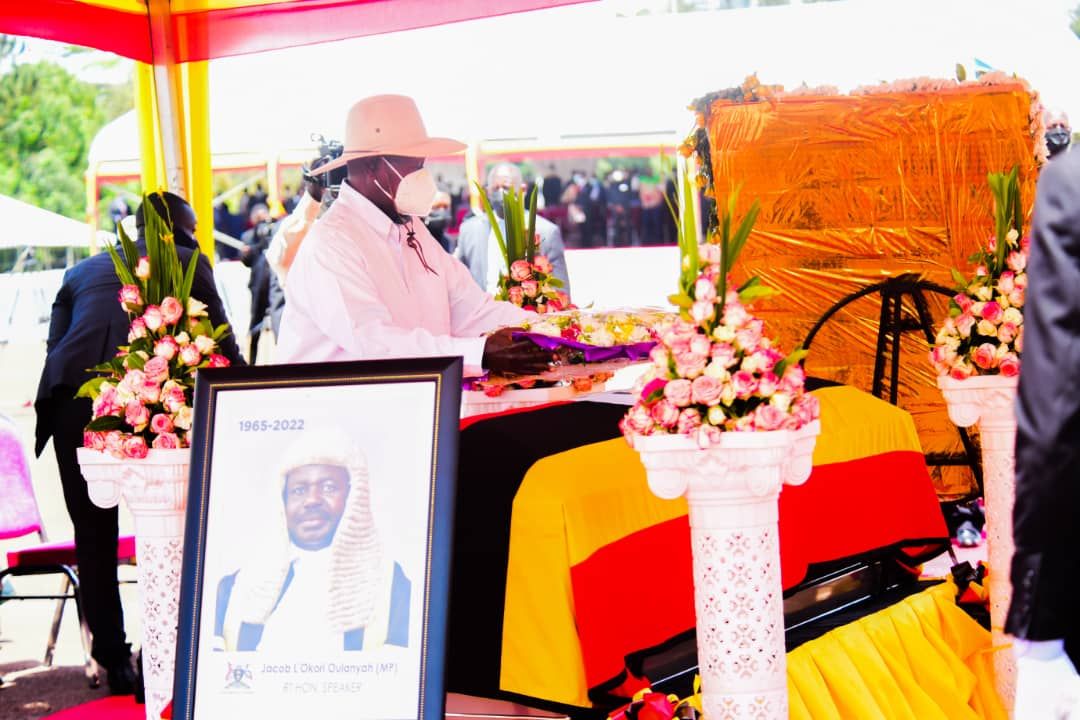 Written by kazofm.admin on April 6, 2022. Posted in National, News.

President Yoweri Museveni has described the deceased former speaker of Parliament, Jacob Oulanyah as a great cadre of the ruling NRM party who used his talents well to benefit the country and made an impact at his young age.

While addressing mourners on Wednesday at Kololo independence grounds, Museveni said: “As NRM, we started dealing with Oulanyah when he was the chairperson of the Parliamentary legal committee. Although he was still in UPC, we noticed him and saw that he had potential. We supported him to take up the duties of Deputy Speaker, he took that time to multiply his talents. He used his talents well. He was a good orator .He was hardworking. Losing Oulanyah now is a big loss. He was somebody who was coming up and the country was going to get a lot of benefits from him.”

According to the president, many governments before the ruling NRM government, tried to solve the problems in Northern Uganda that dated back to 1966 and failed, Oulanyah sped it up when he was voted as the NRM vice chairperson for Northern Uganda last year.

“He had already done good job in uniting northern Uganda. It had been messed up by bad politics. When he became vice chairperson, in short time he had deepened unity. I need to salute Oulanyah and commend him as an example. He broke away from sectarian politics of opposition and made good contribution to the country,” said Museveni.

The president also warned against tribalism that had started to manifest itself following Oulanyah’s death.

“We have lost so many people, from 1972 when we fought Amin to 1986. I know more about the pain of losing people. However, instead of crying, we said we must continue and succeed so that those who died did not do so in vain. Let us succeed for Jacob Oulanyah,” he said.

“I want to salute the Chief Justice for the idea of the Oulanyah Education Fund. Instead of just crying and mourning, you should be looking at how to help the children. Government will contribute to that fund so that the children continue,” said Museveni.

He added that parliament has resolved that every March 23, which is Oulanyah’s birthday will be honoured as the Jacob Oulanyah Memorial Lecture Day.