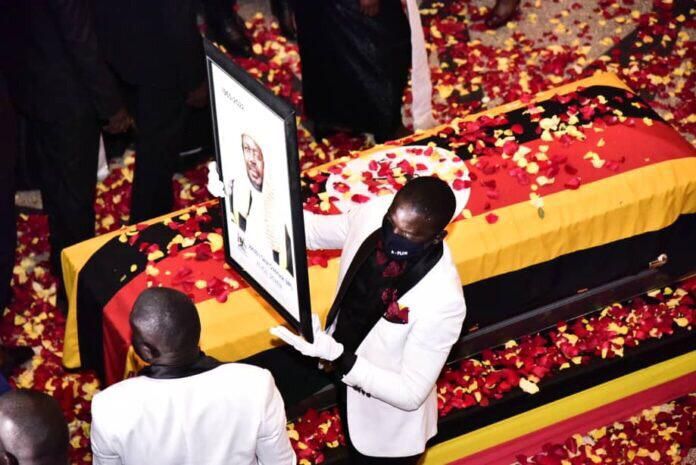 Written by kazofm.admin on April 6, 2022. Posted in National, News.

Dr Jane Ruth Aceng, the Minister of health has confirmed in a brief medical report that the former speaker of the 11th parliament Jacob Oulanyah succumbed to multiple organ failure.

In a report presented during the special sitting at Parliamentary on Tuesday, Aceng informed parliament that Oulanyah’s ill health started in 2019 when he discovered a big swelling in the neck.

“He took it upon himself to seek medical attention in Germany where the swelling was analyzed and established to be cancerous. It was removed and he was started on treatment which he finished at the Uganda Cancer Institute,” said Aceng.

Aceng however says after he had completed treatment for this swelling, he later developed some challenges during the lockdown and election period when he was unable to be in hospital.

“On 23 January January 2022, he was admitted to Mulago Hospital for twoo weeks and during that time, he was being prepared to travel to get gene therapy treatment known as the CART-Cell which did not require more chemotherapy which had suppressed the bone marrow,” she said.

Aceng added that tests were carried out, biopsy tissues recalled for further analysis and the bone marrow analyzed.

Aceng revealed in thisreport that the heart failed, the lungs failed and the kidney failed.

Aceng also revealed that while in Makerere, Oulanyah sustained an injury during a student strike there which led to the loss of his spleen (an organ for manufacturing red blood cells) which resulted into splenectomy.

He had lymphatic system depletion and challenges with stem cell, poor immune system response because of chemotherapy.

“He started having gastrointestinal bleeding because of lack of platelets and we couldn’t stop the bleeding, he also had drug resistant bacteria which is usually hospital-acquired when you spend long in the hospital,” she revealed.

All this resulted from Progressive Recurrent Defused Large B Cell Lymphomia; a type of cancer and the chemo he received.

Oulanyah passed away on March 20 at the University of Washington Medical Centre, Seattle, USA where he had been taken to receive specialized medical care.