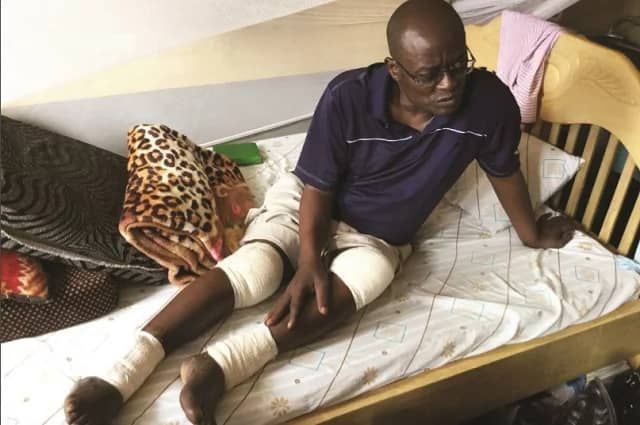 Godfrey Byamukama, the mayor Kamwenge town who was in 2017 tortured by Police on accusations of participating in the gruesome murder of AIGP Andrew Felix Kaweesi has been awarded shs1.4 billion in compensation for the torture.

In 2017, operatives of the Police Flying Squad arrested Byamukama, from Kampala where he travelled as usual for private business. He was bundled into a waiting drone van and detained at Nalufenya police station which at a time was a reknown torture chamber to a number of suspects that had been detained at the facility.

AIGP Erasmus Twaruhukwa, the director in charge of human rights and legal services at the Uganda Police Force, has revealed that the law and order agency agreed to pay Byamukama Shs1.4bn in an out-of-court settlement.

Speaking during a workshop for Regional Police Commanders at Police headquarters on Thursday, Twaruhukwa said government was sued for violating Byamukama’s rights in a civil suit, adding that having realized there was so much evidence against them, the matter was settled out of court.

“We decided to settle the matter out of court. We settled to pay UGX1.4 billion. In that case, everything (evidence) was on social media and if we had allowed the case to go on (in court), we knew we were not likely to win. We would be made to pay UGX 8 billion that they (Byamukama) had asked for,” AIGP Twaruhukwa said.

Sensitive images that surfaced on social media showed torture marks all over Byamukama’s body which attracted ridicule and condemnation from the members of the public, civil society organizations among others.

The Police director however warned that there are many cases that can be mitigated against by police, adding that this can be done when officers stick to what the Police Act and the Constitution provide.

“We need to have a situation where there is no torture and no detention beyond 48 hours. A police officer who makes government loses money, should have action taken against them. These cases happen because people commit crimes with impunity and know the Attorney general will deal with them. The involved officer should pay a percentage of the award and maybe we shall learn to do the right thing,” said Twaruhukwa.

Four police officers including D/ASP Patrick Muramira, D/ASP Fred Tumuhairwe, Habib Roma and Ben Odeke were arraigned before the Buganda Road Chief Magistrates court and charged with torture. However, they were later released on bail.