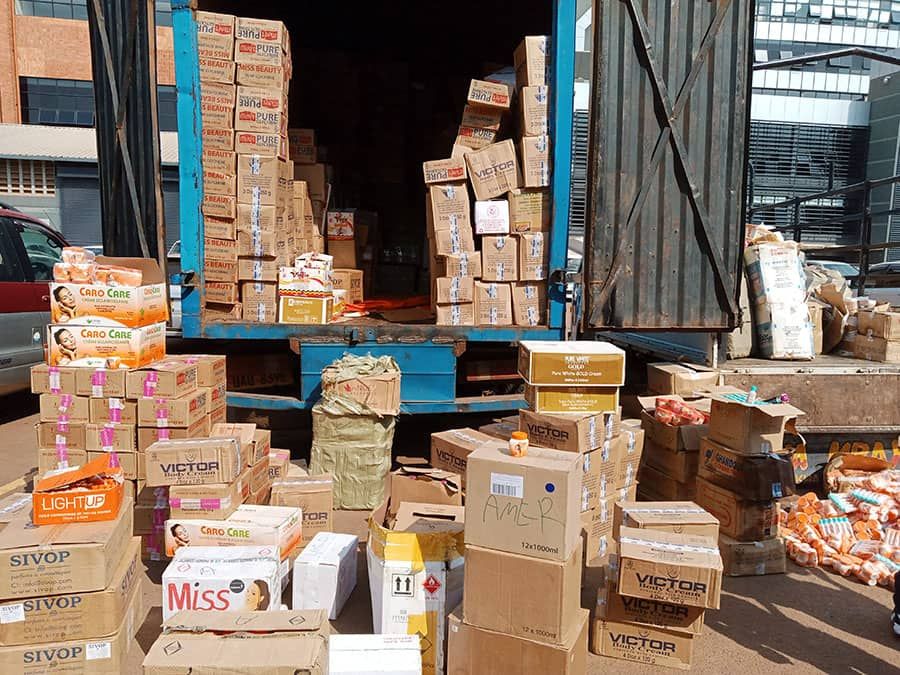 Written by kazofm.admin on February 16, 2022. Posted in Business, National, News.

Uganda Revenue Authority (URA) has intercepted over 10,000 kilograms of illegal cosmetics in the Central Business District of Kampala and its peripheries.

Ibrahim Bbosa, the URA spokesperson told journalists that the cosmetics had been disguised as Movit products and were loaded on two trucks with REG No. UAU 839E and UBB 993F. He said these were intercepted at Nalukolongo and the Northern By-pass in Kampala.

“These cosmetics are prohibited in Uganda because they contain hydroquinone and mercury chemicals scientifically proven to be one of the leading causes of skin cancer. The East African Community Customs Management Act also prohibits the importation of such harmful products and protects society from consuming such goods in the region,” said Bbosa at a press briefing.

Bbosa explained that the importation of such smuggled illegal products also creates unfair competition on the market because they do not pay taxes which is a disadvantage to traders who deal in safe cosmetics and pay taxes.

Geoffrey Balamaga, URA’s Enforcement Manager, said smuggling of illegal cosmetics has manifested mostly in the areas around Lake Albert, the porous points of Mpondwe, Hoima area, Congo Borderline in the west, Bunagana, Butogota, and others.

“URA has intensified operations to curb the smuggling of contraband items by leveraging the use of Non-Intrusive Inspection technology at the border points and field intelligence enforcement operations,” said Geoffrey.

According to the Act, a penalty of 50% of the value of goods or imprisonment for a term not exceeding 5 years or both is handed to those caught in violation of the law.

Section 199 of the Act also states that the transporting vessels are liable to a fine not exceeding seven thousand dollars, and any vessel and goods in respect of which such offence has been committed shall be liable to forfeiture.