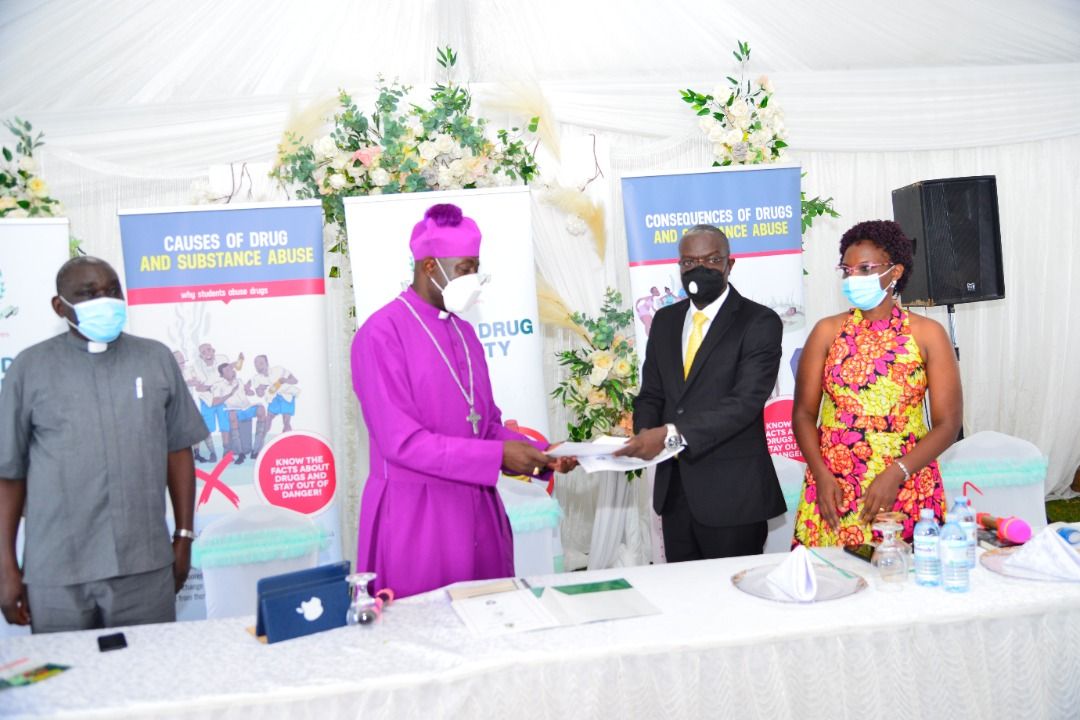 National Drug Authority has entered into a Memorandum of Understanding (MOU) with the Anglican Church of Uganda (COU) intended to implement a school-based drug abuse prevention program in COU-founded secondary Schools.

The launch of this partnership that happened on Wednesday coincided with the visit of Archbishop of COU, the Most Rev Dr. Samuel Stephen Kaziimba Mugalu to inspect NDA’s quality control laboratory in Mulago.

Speaking at the launch, Dr. Kazimba said that the ultimate objective of this partnership is to help youths in secondary schools avoid initiation into the use of drugs and if they have already started, they are helped to stop it.

Kazimba said that drug abuse has become a global problem today especially among the youth and Africa is at cross roads as far as addressing the drug abuse problem is concerned.

While referring to the African Union report 2020, Kaziimba reechoed that Africa will experience the largest growth in numbers of drug abuse by 2050 with drug abuse in East Africa is set to increase by 150% from 2 million to about 5.5 million by 2050.

“This is a challenge to us, drug abuse is predominantly a male problem, that’s why we need to give attention to the boy child because if we don’t we are losing,” he said.

Kaziimba revealed that males account for 90% of people getting drug abuse treatment.

Hellen Ndagije, the NDA head of product safety revealed that Kuba is the most common drug used in schools this is being packed in small packs and smuggled into schools.

She said the available drugs being used are in the form of biscuits, and sweets, and they are smuggled into schools.

She noted that the campaign which the organization has initiated in partnership with the church of Uganda will go a long way in curbing the vice.

Dr. Medard Bitekyerezo, the NDA Board Chairperson, noted that NDA has been deploying a multi-pronged approach including; creating and enhancing collaborations, physical and virtual engagements, use of information, Education and Communication tools and conducting research to end drug and substance abuse.

He said that the COU has for a long time exhibited strong stand against drug and substance abuse in its teachings, adding that they have been working with COU especially with the Northern Uganda Diocese to end the problem especially among the youths.

The MOU expects to widen NDA’s collaboration with the Anglican Church which notably has over 13 million believers in Uganda and is affiliated with several other institutions including schools, universities and media platforms.

“Faith based institutions are well positioned to reach almost all Ugandans as most of Ugandans have a religious inclination,” said Bitekyerezo.

In 2015, Uganda signed and ratified the United Nations (UN) Narcotic Convention, and passed a narcotic law which criminalizes substance abuse.