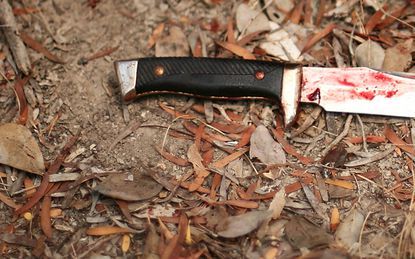 Residents of Kyarukobwa B cell, Kyaruhanga Ward, Kagongo Division, Ibanda Municipality in Ibanda district were on Tuesday evening left in shock after 20 year old man slit his throat with a sharp knife and bled to death.

The deceased identified as Andrew Lubega is said to have been working in a stone quarry site in Katoma for a long time.

An eye witnesses told our reporter that at around 6:30pm on Tuesday, the deceased picked a knife from children who were slicing cabbage and slit his throat and started running while he bled, until he collapsed and died.

Atuhaise Evelyne Nalongo who has been Lebega’s supervisor said that on
that fatefull day, Lubega turned up for work as usual and later in the evening requested for UGX 5,000 from his supervisor and after receiving the money, Lubega committed suicide.

Tophas Kabakama Muganda, the chairperson LC1 Kyarukobwa B cell said
that the deceased has been a well-known humble person in the village who had been sober since morning but the incident left them all in shock.

Elias Ahimbisibwe, the father to the deceased told our reporter that he last saw his son before Easter Celebrations and had since been staying with his mother in the trading center until Tuesday late evening when he received a call from people informing him about his son’s death.

The reasons behind his decision remain unclear.

Police from Ibanda Central Police Station rushed to the scene and took the body to Ruhoko heath center IV for postmortem as investigations into the matter continue.