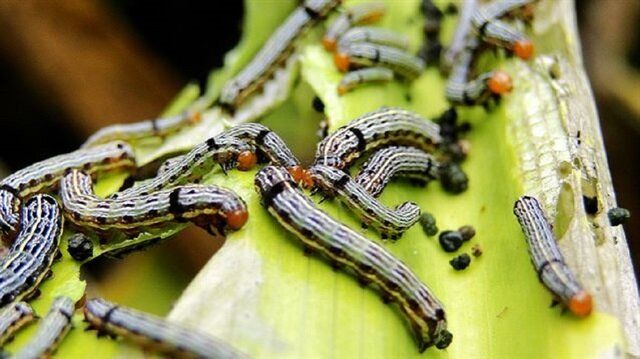 The Ministry of Agriculture, Animal Industry and Fisheries has revealed intentions to procure and distribute over 3,001 litres of the recommended pesticides and appropriate gear required to beat back the raging African army worm invasion that has devastated crops in many parts of the country.

Fred Bwino Kyakulaga, the State Minister for Agriculture, said that the ministry has contacted various distributors of the relevant pesticides and advised them to ensure that enough stocks exist in the country especially nearer the affected communities to control the pest.

Kyakulaga revealed that one litre of pesticide which costs about UGX 20,000 can effectively contain one acre of affected crop/ pasture land. Adding that the government will continue to conduct surveillance and monitoring of the pest, with a view of minimizing its buildup and potential full-blown epidemic.

“Ministry Crop Inspectors have been dispatched to various affected districts to verify reports, establish the pest status as well as provide guidance to the district staff and farmers on the control measures,” said Kyakulaga in a statement.

In the Tuesday plenary sitting, Members of Parliament tasked Prime Minister, Rt. Hon. Robinah Nabbanja to present a report on the African armyworms that are ravaging crop gardens across the country and threatening food security in the country asking for immediate action to be taken by government.

Information received by the House indicates that more than 47 districts across the country including; Mukono, Wakiso, Katakwi, Bukedea, Bugweri, Serere, Busia, Bugiri, Mityana, Kiryandongo, Namutumba, Kumi, Luwero, Kasese, Masindi, Soroti, Nakapiripirit, Bulambuli, and Hoima have among others been invaded by the African armyworms that have left several acres of maize, millet and sorghum gardens destroyed.

In response, Prime Minister Robinah Nabbanja said that on Monday, cabinet got the report from the Minister of Agriculture about the issue and they came up with some resolutions, among which is the provision of pesticides to the different districts that have been affected.

Nabbanja appealed to MPs to support government in the fight against the armyworm in the different areas.

Dr. Stephen Byatwale, the commissioner in-charge of crop protection department in the Ministry of Agriculture recently said that the African Armyworm is a migratory moth suspected to have migrated from neighbouring countries renowned for higher temperatures into Uganda as a result of the climate change that the country is currently experiencing. Adding that the moth whose larvae stage is pest (army worm) causes a lot of losses to cereals.

“The caterpillars move in large numbers, attacking crop fields and that invasions are mostly common at the onset of the wet season. They feed on cereals including; maize, millet, sorghum and pastures. It has also been observed to also feed on sugarcane and wheat. In maize and other cereals, yield loss as a result of caterpillar feeding goes up to 100%,” he said.

The worst outbreak of the armyworm was reported in Kenya and Tanzania in 2001, where at least 157,000 hectares of cereals were destroyed.