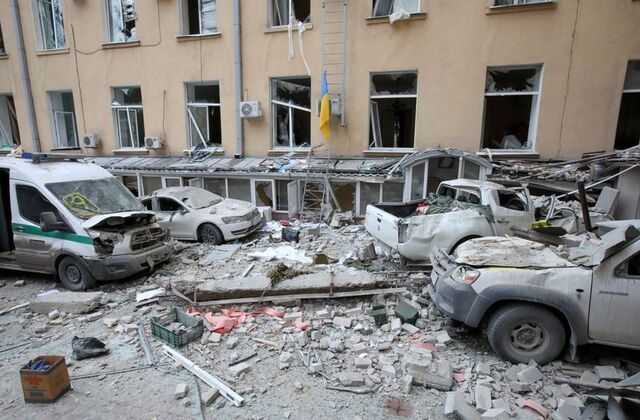 Upon invasion into Ukraine’s capital Kyiv the previous day, similar strikes killed and wounded dozens in the city.

Volodymyr Zelenskiy; the Ukrainian President said the artillery barrages on Kharkiv amount to state terrorism. “The rubble is being cleared and there will be even more victims and wounded,” he said.

Nearly a week since Russian troops poured over the border, they have failed to capture a single major Ukrainian city after running into fierce resistance. The civilian deaths of the last 48 hours are an unfavourable sign that frustrated Russian commanders could be resorting to more devastating tactics.

Pictures released by U.S. satellite company Maxar showed Russian tanks, artillery and fuel trucks stretching for 40 miles (60 km) along a highway to the north which affirms that Russia still has more forces to throw into the fight.

Meanwhile, in Moscow, Russian Defence Minister Sergei Shoigu says the Kremlin will place its military operation in Ukraine until it achieves its goals. This is aimed at protecting the city from threats created by the West and is currently not occupying Ukraine’s territory.

Russian foreign minister Sergei Lavrov told a Geneva disarmament meeting via video link on Tuesday that Ukraine had been seeking nuclear weapons. Dozens of diplomats walked out as he began his speech.

Zelenskiy’s government remains in control of Kyiv with soldiers and civilians ready to fight invaders street by street.