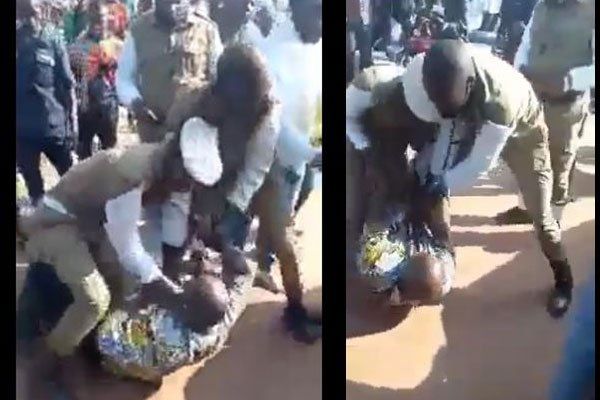 UPDF Officer detained for allegedly trying to shoot a traffic police officer who was on duty.

Police in Kampala have arrested a UPDF solider identified as Herbert Kakama attached to Chief of Training and Recruitment, Mbuya, after he appeared in the video making rounds on social media where he is seen wrestling two traffic police officers to the ground.

In an incident that happened on Saturday, the UPDF officer RA 080643 WO1 had parked his vehicle REG No. UBK 210V at Kibuye roundabout and blocked big trucks from joining the roundabout which raised the concern of the traffic officers.

The suspect was consequently overpowered as they wrestled him to the ground, disarmed and arrested him before being dragged to Katwe Police Station where he is currently detained.

Police officers privy to the matter revealed that they have opened up attempted murder charges against the suspect.