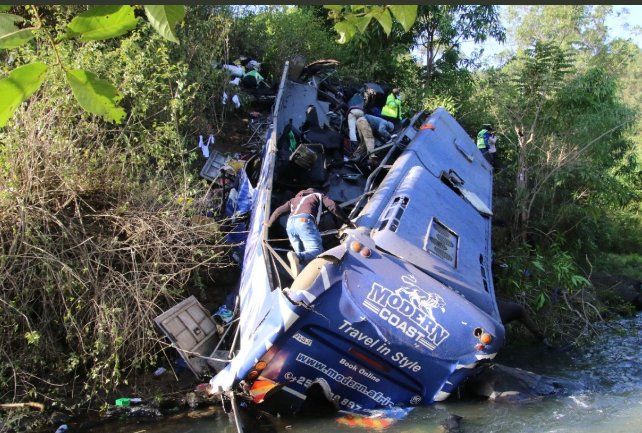 34 confirmed dead after bus plunges into a river

Up to 34 people have been confirmed dead after a bus belonging to Modern Coast Company travelling from Meru to the port city of Mombasa veered off the Nithi Bridge and plunged into the Nithi River, along Meru-Nairobi highway in Tharaka Nithi county, Western Kenya on Sunday evening.

Evans Achoki, the Eastern Regional Commissioner said bodies have been retrieved from the wreckage of the ill-fated bus, with the death toll currently standing at 34.

The Police said 11 survivors; all male are receiving treatment at Chuka County Referral Hospital, St Theresa Kiirua Mission Hospital Meru and St Peters Hospital Nairobi with some nursing serious injuries and the search for more bodies in the river continues.

Nobert Komora, the Tharaka Nithi County Commissioner was quoted by the Nation saying that preliminary investigations showed that the bus’s brakes may have failed, preventing its driver from properly turning on a sharp bend at the bridge.

Komora said they were also working to retrieve the bus wreckage from the scene of the accident.

The National Transport and Safety Authority (NTSA) has since halted the operations of Modern Coast Express Limited.

“A thorough multi-agency investigation into the crash and an evaluation of the operator’s safety operational standards is currently underway,” said George Njao NTSA Director General in a statement.