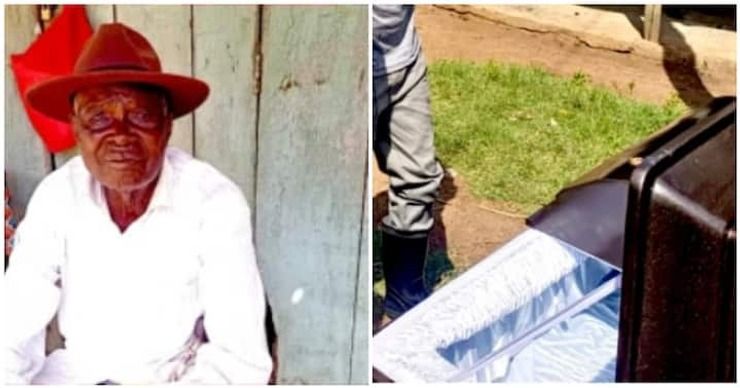 An 87-year-old identified as Aloise Otieng’ Ominang’ombe from Teso South Constituency in Busia County has bought a new coffin where he would like to be buried after his death.

Prior to this, he bought two others coffins in 2009 and 2012 which he says are now out of fashion and will be turned into pieces of firewood during his funeral, as the new one becomes his final resting place.

While rehearsing inside the brand new coffin for his future burial, Aloise Otieng’ Ng’ombe, a father of 18 revealed that the move is a deliberate effort to teach his community at large that death in inevitable and it is only wise to prepare for such unprecedented times.

“I want this to go as a lesson to my community at large. You may lack basic needs when you are alive. But when you die, people will slaughter bulls, buy you nice clothes and shoes yet you will be long gone. That is why I decided to plan for a send-off befitting my status in society,” said Ominang’ombe.

Ominang’ombe disclosed that his newly purchased coffin is worth Ksh.58,000 (approximately UGX 1.8m) and has been stored at his shop in Obekei area.

The incident has sparkled mixed reactions from members of the public, with some supporting his decision while others are opposed to the old man’s plans as they insist that it is against religion.