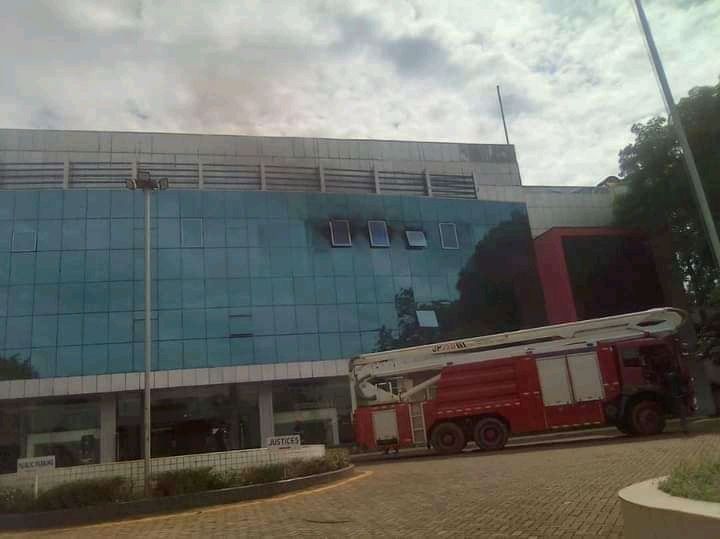 Several documents are feared destroyed following a fire outbreak at the Supreme Court building in Kololo, Kampala on Wednesday morning.

Fred Enanga, the Police spokesperson revealed in a statement released April 27th 2022, that the fire which started at around 10.12am  at the Supreme Court, located at Plot 10, Upper Hill, in Kololo was rapidly and promptly responded to by the Directorate of Fire and Rescue Services.

The statement revealed that first firefighting crew that was dispatched from the Kololo Independence Grounds, arrived within five minutes and found heavy flames and smoke, coming from the Chambers of The Chief Justice. They immediately entered the building and aggressively started fighting the fire in the Chambers. They were joined by additional firefighters from the headquarters forming a total of 16 crew members in four firefighting trucks who attended to the scene and quickly put out the fire within 30minutes.

“Their efforts prevented the fire from spreading to the offices of His Lordship the Chief Justice and other adjacent offices,” partly read the statement.

“We are grateful that there were no injuries or lives lost. Only furniture and the AC system, inside the Chambers got burnt. We want to greatly thank the firefighters, for saving the multibillion complex and other properties in the building from getting burnt,” said Enanga in a statement.

An eye witness who preferred anonymity told our reporter that by the time the fire broke out, Justices Eldard Mwangusha and Mike Chibita had reported for duty.

Adding that the fire broke out when a woman opened the door next to the Chief Justice’s chambers and switched on the light, which triggered a blast. The source further alleges that the fire burnt a number of vital documents in the chambers.

Jameson Karemani, the Judiciary spokesman told journalists that only one chamber has been affected and there were no causalities.

“Apart from the few things, which were burnt, no much damage was done,” said Karemani.

He said preliminary findings indicate that the fire could have emerged from a faulty air conditioning system but said that police will explain more.

Enanga said that the Director of CID, visited the scene with a team of experts from Forensics, Fire and Rescue, Electrical Engineers and Consultants to establish the cause of fire.

“A report revealing their findings will be released accordingly. We call upon the public to remain calm and further remind them to adopt better fire detection and protection measures. Remember fire can start anywhere and anytime. It is therefore, everyone’s role to fight fires,” said Enanga.