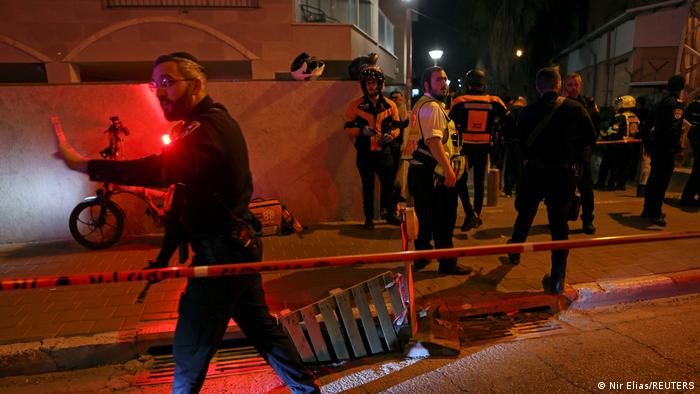 Five people have been shot dead by a Palestinian gunman in a suburb of the Israeli city of Tel Aviv, in the third deadly attack of its kind in a week.

The attack happened in Bnei Brak, one of the country’s most populous ultra-Orthodox Jewish areas.

One of the victims is a police officer identified as Amir Khoury, 32, who was trying to stop the attacker; the rest were civilians. According to a paramedic at the scene, the gunman was shot dead by the police officer moments before he also died.

The attacker has been identified as a 26-year-old Palestinian identified as Diaa Hamarsheh from Ya’bad, a village near Jenin, in the north of the occupied West Bank, who had previously been jailed in Israel.

Footage from the scene in Bnei Brak showed Hamarsheh (the attacker) dressed in black shooting at people with a rifle on a street and killing the driver of a passing car.

“Israel is facing a wave of murderous Arab terrorism. The security forces are operating. We will fight terror with perseverance, stubbornness and an iron fist,” he said.

Former prime minister and current opposition leader, Benjamin Netanyahu said that Israel was “in the midst of a dangerous wave of terrorism that had not been seen for many years… Determined action must be taken to restore peace and security to the citizens of Israel.”

According to the AP News agency, Israel’s government, with support from the Biden administration, has tried to do what leaders describe as “shrinking” the conflict. Instead of seeking a partition deal with the Palestinians, it aims to keep things quiet by taking steps to improve the Palestinian economy and reduce frictions.

US Secretary of State, Antony Blinken also condemned the attack.

Palestinian President, Mahmoud Abbas condemned the killings of the Israelis and warned that the attack might lead to escalation at a time when “we are striving for stability.”

However, the Palestinian militant group Hamas, which governs the Gaza Strip, praised the attack, saying: “We express our blessing to the Tel Aviv operation.”

Despite the fact that the Tuesday and Sunday attacks were also carried out by Palestinian citizens of Israel and all the attackers killed by police or passersby, Israel security forces stay on high alert.