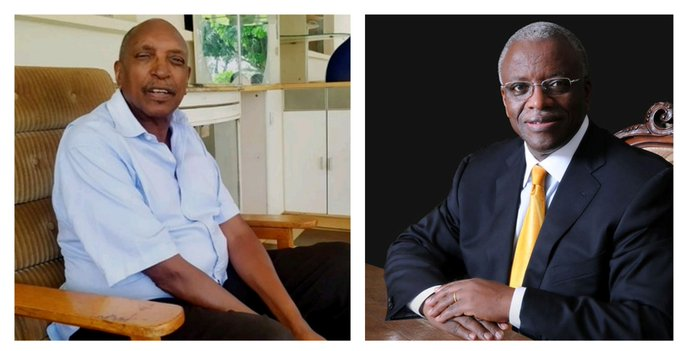 Yona Kanyomozi, a former minister in the regime of Obote 2 in 1980’s has dragged former  Prime Minister, John Patrick Amama Mbabazi to court for failure to pay rent amounting to UGX 27million($7507) for his office along Nakasero road in Kampala.

The court documents reveal that in 2015, Kanyomozi entered into an unwritten tenancy agreement with Amama Mbabazi when he rented the office space on Plot 29 along Nakasero road whose monthly rent was $5000(approximately UGX 18 million) starting August 1st 2015 to serve as the head office for Go Forward during the 2015/16 presidential campaigns.

Through his lawyers Anguria and Co Advocates, Kanyomozi, revealed that Mbabazi paid six months in advance ending December 2015, but after the expiry of the six months that he had paid, Mbabazi continued occupying the office space for another four months between January and April 2016 without complying with the terms of the tenancy agreement.

Kanyomozi says that after the first deposit, Mbabazi started becoming uncooperative, avoiding him and paying rent in insignificant portions despite demands and reminders by the landlord for full payment.

Court documents show that by October 2021, Mbabazi paid only $39992(approximately UGX 143.7million), leaving an outstanding balance of $7507(approximately UGX 27 million) and all efforts to have the issue resolved have proved futile as he has purposefully denied Kanyomozi audience.

Yona Kanyomozi now wants the Commercial Division of the High Court in Kampala to declare that Mbabazi breached the contract he entered for rent of office space on Plot 29 along Nakasero road and be ordered to pay $7507(approximately shs27 million) in rent arrears.

The former minister also wants court to order Mbabazi to pay $20,000(approximately UGX 73million) as general damages plus interest from the date of defaulting on payment until when he pays.

Consequently, the court has given Mbabazi 15 days to file his defence in the matter or else the court will proceed with the suit and give judgment in his absence.