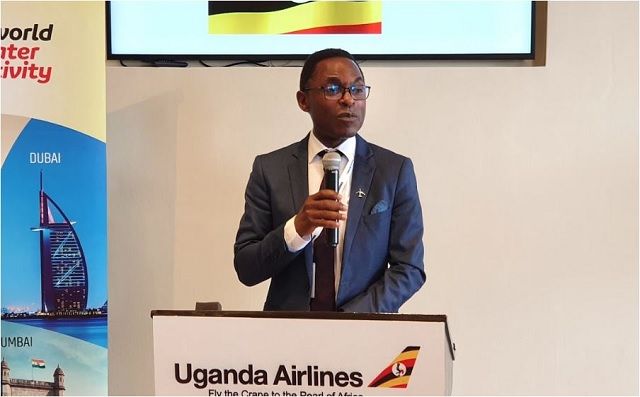 The suspended Chief Executive Officer of Uganda Airlines; Cornwell Muleya has written to Waiswa Bageya, the airline interim Chairman Board of Governors and Permanent Secretary Ministry of Works and Transport (MoWT) indicating that he will take legal action against the airline over unlawful suspension and termination of his employment contract.

In April 2021, Gen Edward Katumba Wamala, the minister MoWT, suspended a number of senior managers at the airline for at least three months. The 13 affected top managers included the CEO Muleya.

This was on the orders of the President Museveni to pave the way for investigations into allegations of financial mismanagement, collusion and nepotism in staff recruitment among other issues.

After nine months on suspension, interim board of directors chaired by Bageya, took the decision to terminate the CEO’s contract and that of the director commercial and procurement, Rogers Wamara on February 18, 2022.

The decision to terminate their contracts came weeks after Auditor General, John Muwanga, noted in his latest audit report that Uganda Airlines was losing billions due to the delayed conclusions of the suspension cases.

Muleya says he shouldn’t have been suspended and terminated without following proper procedures of the law adding that he was not accorded an opportunity to respond to the allegations nor was he heard before sending him on leave of absence.

According to a notice from his lawyers Muwema & Co Advocates dated March 28, 2022, Muleya is seeking UGX 3.5 billion in damages, payment arrears and other costs from the airline, failure of which will lead to a legal challenge.

“Despite the above glaring irregularities, our client was directed to keep away from the company premises without any lawful or just cause. Investigation into alleged mismanagement by our client never took place. In fact, no investigation report has ever been produced to this end,” said Muleya through his lawyers.

Muleya explains that whereas his employment contract provided for dismissal from employment on grounds of serious misconduct or gross negligence, it did not provide for termination.

The lawyers noted that their client never furnished with the particulars and nature of his offense which contravened regulation 1(11) (a) of the disciplinary code Under Schedule 1 of the Employment Act 2006 adding that his suspension was illegal because it exceeded the maximum period of four weeks allowed under Section 63 (2) of the Employment Act, 2006.

Through his lawyers, Muleya now wants immediate reinstatement as the Chief Executive Officer of Uganda Airlines, an unconditional apology for material inconvenience, reputational damage and the loss he suffered.

Muleya who had been earning UGX 60 million per month inclusive of allowances and other benefits wants the airline to pay him UGX 3.5 billion in damages and other costs including salary arrears.