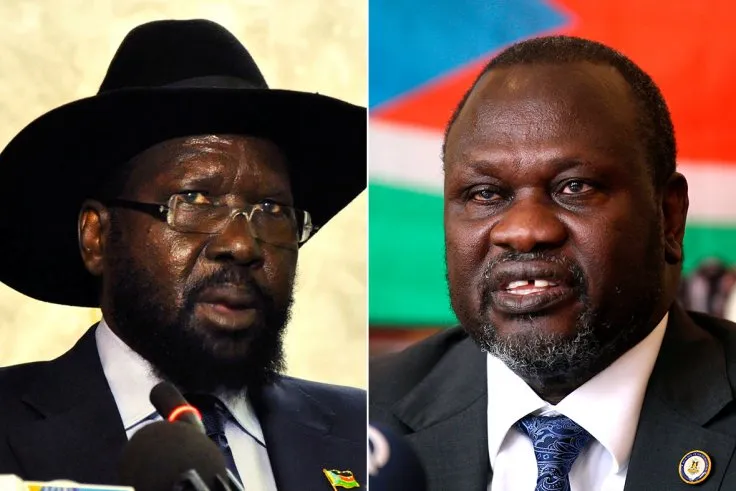 Anxiety grips Juba as Kiir and Machar wrestle over security

Tension has been growing in South Sudan’s capital Juba as President Salva Kiir and First Vice-President, Riek Machar disagree on how to implement some security arrangements as stipulated in the 2018 peace agreement.

On Monday, President Kiir convened a press conference at the presidential palace after Riek Machar, the first vice president said his house has been surrounded by security forces, putting at risk his personal safety and people within the residential area in which he lives.

“Without prior information, the South Sudan People Defense Forces (SSPDF) deployed armed forces with armoured personnel carriers on the routes to my residence. Persons who attempted to go to the residence were turned off by these troops. The deployment was removed only at 6.15 am this morning [Monday] with no explanation provided,” Machar said in a statement.

In this statement, Machar called on the regional, international community, and the United Nations Security Council to take note of the situation.

In response Kiir said; “There is no issue of insecurity on the streets in Juba. What is being done is a normal thing that happens in any country.   In Juba here, there are people, criminals who have infiltrated and are living with civilians. And these people can go and shoot near the house, for example, if they go to the house of Riek Machar and they fire there, we will see it is Riek who has started to attack people. So, the presence of army and security forces in the streets of Juba does not show there is insecurity,” said Kiir at the press conference.

The president described it as “normal practice”, but Machar condemned the move, saying it “creates doubt” that the fragile peace process can succeed adding that the SSPDF deployment undermines peace building.

“Such an act is disruptive to the peace implementation process and weakens trust and confidence building, reconciliation and healing among the people and dialogue among peace parties. It also created doubts nationally, regionally and internationally and reflects very poorly on the commitment of peace parties to resolve issues peacefully,” said Machar.

Additionally, the United States has expressed “concern” over growing tensions in South Sudan.

In a statement, the US State Department called on President Salva Kiir and First Vice-President Riek Machar to honour their obligations under the peace deal signed in 2018. It also noted that the two leaders were both responsible for the deteriorating situation.

But its implementation has been hampered by mistrust among the leaders, inter-communal fighting and insecurity.

In the Monday address, President Salva Kiir also issued a directive to declassify all documents on the country’s long-running civil war promising to grant a presidential pardon  to all those found culpable of offences by the released materials.

Salva Kiir’s first ever such directive comes a day after dozens of heavily armed troops were deployed around the residence of the First Vice President Riek Machar.

“This is very important so that the people of South Sudan know the truth and judge for themselves, and from this knowledge, we must tell the truth because genuine reconciliation has its basis on it. So there is no cause for alarm over this, because we are interested in it for the public to know the truth about the background of the conflict in our country. We all considered this agreement as the path to our stability and I am committed with our partners to implement it. I come before you today to affirm my government’s commitment to peace in our country,” Kiir told journalists.