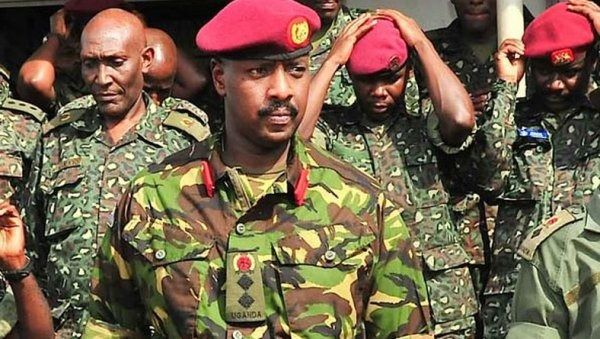 Uganda’s army on Wednesday signaled a diplomatic plan to end the resurgent deadly attacks by armed cattle rustlers in the troubled Karamoja Sub-region.

This follows an incident where bodies of two UPDF soldiers and three geologists were on Tuesday recovered by security forces in a joint search operation after they were ambushed and killed by suspected armed cattle rustlers in Moroto District.

Lt Gen Muhoozi Kainerugaba, the commander of the land forces of the Uganda People’s Defence Force(UPDF) has through his twitter handle sounded a thorough warning to the rustlers; “My Karimajong brothers! We have begged you to stop attacking your neighbours but no avail! You have refused all our appeals! Well, now we are coming and hell is coming with us!”

“Karimojong killed my soldiers in cold blood! There will be hell to pay for that!! If they want to avoid retribution, they better get in touch with our RDCs and commanders in the region NOW!! Otherwise, let us see who the real men are!” he added.

UPDF has for long struggled to encourage armed cattle rustlers to abandon their activities but conservative estimates show the criminals have through persistent raids claimed almost 50 civilian lives and close to ten security officers in the last three months.

Almost every week, hundreds of animals are reported stolen across the Karamoja Sub region- even after UPDF reinforced deployment in October 2021 to deter the criminals feared to have over 500 guns, illegally.

“They have provoked us and now we are going for them wherever they are,” UPDF 3rd division commander Brig Joseph Balikudembe told journalists on March 22. Balikudembe says UPDF accounts revealed that 251 of the rustlers operating like bandits were killed in 2021 alone, at least 1,626 suspected rustlers were arrested, 291 of whom have since been prosecuted and a total of 14,898 livestock were recovered. Security forces also recovered at least 160 guns.

Local leaders are however concerned that the insecurity in the Karamoja region has deteriorated and disrupted the peace that had been restored in 2008 after a five-year disarmament enforced by government.

500 illegal guns are estimated to still being kept by the suspected rustlers.