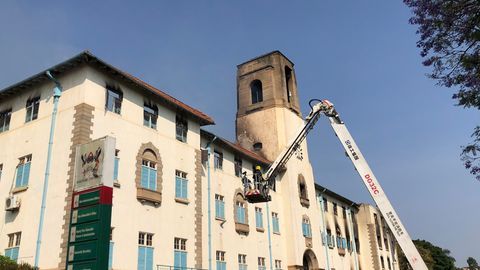 The 81-year old iconic Makerere University main building that caught fire in 2020, will be demolished in two weeks’ time to pave way for construction of a similar building.

The university’s most recognizable symbolic building whose construction was completed in 1941 during the leadership of George C. Turner was originally built with a 20th-Century British architectural design.

When the building caught fire on November 20, 2020, part of the building that held crucial staff and students’ records and documents was destroyed and the building has since developed cracks, which necessitated that it is brought down and constructed afresh.

The university management has at the moment handed over the site to contractors, Excel Construction Company, for the project.

Speaking to journalists yesterday, Prof Barnabas Nawangwe, the university vice chancellor said the building should be completed in time for the university’s century celebrations in August.

“We handed over the site to Excel Construction Company that won the bid. They are slated to start construction immediately. If they work day and night, the building should be ready before we celebrate our 100 years,” Prof Nawangwe revealed.

In 2021, Parliamentary cabinet approved UGX 21b supplementary budget for reconstruction of the main building to match its previous form as a way of conserving its architectural character thereby recommending the demolition of the entire building.

Prof Nawangwe has appealed to Ministry of Finance to release the funds soon to enable the university pay the contractor at every stage of construction.