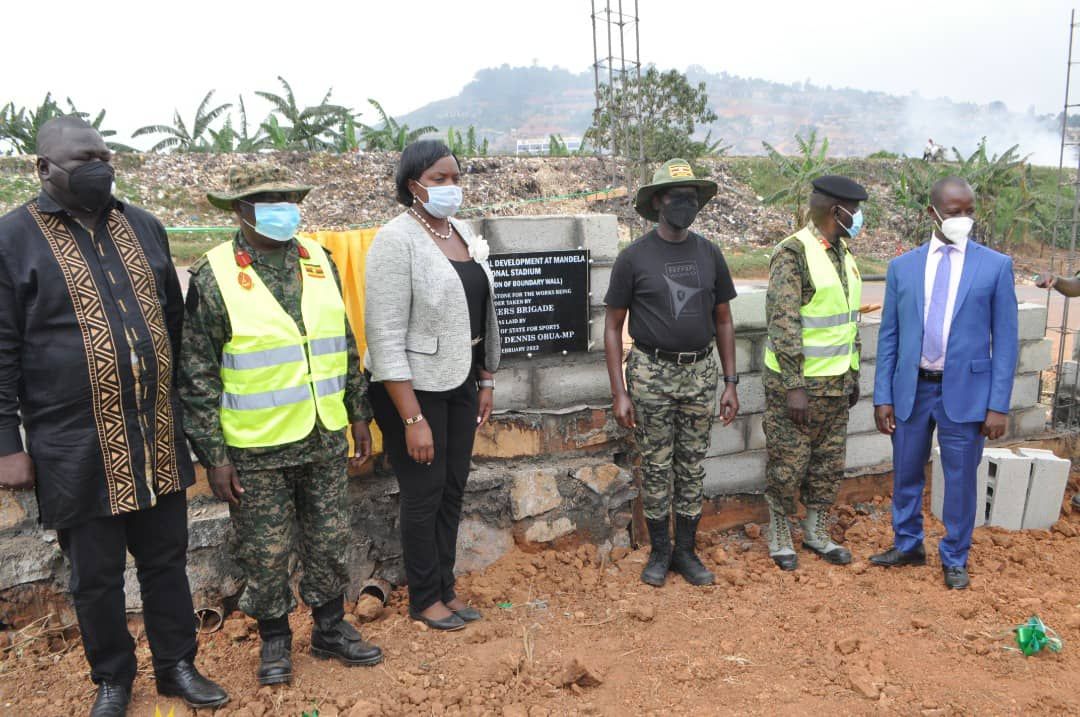 Namboole Stadium handed over to UPDF Engineering brigade for renovation

Written by kazofm.admin on February 3, 2022. Posted in National, News.

The formal and official hand over of the Mandela National Stadium, Namboole site to the UPDF Engineering brigade to commence works of renovation and upgrading the stadium to International standards was yesterday flanked by Hon. Dennis Hamson Obua, the State minister of sports and witnessed by the chairperson of the Mandela National Stadium board, Anne Abeja, Brigadier General Engineer Byesigye Bekunda, the Commander of the UPDF Engineering Brigade, Hon. Ibrahim Ssemujju Nganda, the Area member of Parliament, Jamil Ssewanyana, the Manager of Mandela National Stadium, Dr. Bernard Patrick Ogwel, the General Secretary, National Council of Sports and several officers from the UPDF.

The two phased planned renovation and upgrade will have Phase 1 that will take at least four months involving the securing and construction of a perimeter fence around the stadium. This phase is estimated to cost at least Shs 3.8 billion.

The UPDF Engineering brigade will then proceed to Phase II which will include upgrading the stadium to international standards. This phase is estimated to cost at least Shs 67 billion and it is incorporated in the supplementary budget.

The goal is to upgrade to a World class Stadium suitable for hosting national, regional, continental and International games as well as protect and sustain this national asset.

Hon. Obua believes that this perimeter wall will help solve the long standing concern of encroachers around the peripheries of this land that was 24 years ago procured by Government to construct an international stadium.

“Today, we have started the upgrade and renovation of the Mandela National Stadium, Namboole with the perimeter wall fencing around the stadium land. The wall will help solve the long standing issues of encroachment on the stadium land. This is the journey. We believe the UPDF shall do perfect work,” Hon Obua said.