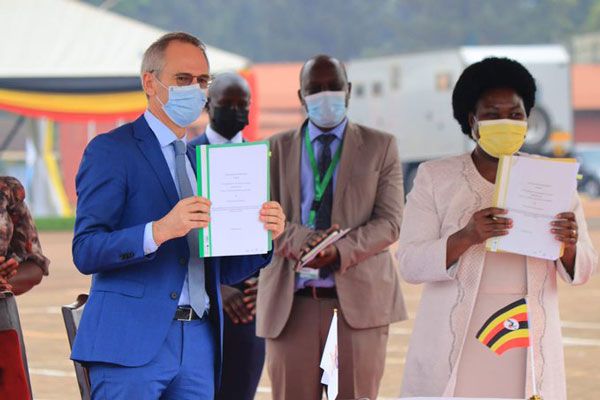 Written by kazofm.admin on February 1, 2022. Posted in National, News.

The Final Investment Decision(FID) was announced during a ceremony at Kololo Independence grounds, Kampala that was graced by the President of Uganda, Yoweri Museveni, Tanzania’s Vice President Philip Mpango, heads of France’s Total Energies and CNOOC among others.

“Today is the day we commit to invest $10 billion in the Tilenga and Kingfisher projects and the 1,443-km long pipeline,” Total Energies chairman and CEO Patrick Pouyanne said in a statement. Pouyanne described the controversial pipeline as a “masterpiece” of a project, although critics charge that it threatens livelihoods and fragile ecosystems in the heart of Africa. “From today with the FID, the project will fully enter into the construction phase,” he said.

CNOOC Uganda president Chen Zhuobiao said: “Achieving FID is a first step towards achieving first oil and unlocking opportunities for investment and development of Uganda and the whole region.”

The project aims at exploiting the huge crude oil reserves at Lake Albert, the development of oil fields, processing facilities, a 1,443-kilometre export pipeline from Uganda through Tanzania to the Indian Ocean port of Tanga.

According to projections by the Petroleum Authority of Uganda (PAU), 14,000 direct jobs and 45,000 indirect jobs will be created for Ugandans. Of the direct employment, 57% are expected to be Ugandans, which is expected to result in an estimated $48.5m (Shs169b) annual payment to Ugandan employees.

Ruth Nankabirwa Ssentamu; the Minister of Energy and Mineral Development said this milestone puts Uganda and partners on the path to first oil in 2025.

Uganda discovered crude oil reserves near its border with the Democratic Republic of Congo in 2006, but production has been repeatedly delayed by disagreements between the government and oil firms over tax and development strategy, and a lack of infrastructure.