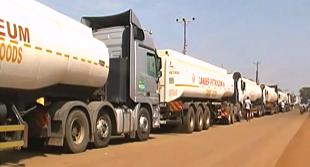 Written by kazofm.admin on January 17, 2022. Posted in National, News.

Amid skyrocketing fuel prices in the country for the past few days with a litre of petrol going for as much as Shs 12,000 in some parts of the country, Uganda Revenue Authority has cleared over 400 fuel tankers at the Malaba boarder.

In a letter written by Ministry of Energy and Mineral Development on January 16th, the increasing fuel prices were attributed to stock out of petrol at some outlets caused by truck delays at the border.

In response, the URA’s Assistant Commissioner Public and Corporate Affairs, Ibrahim Bbossa says over 370 trucks both fuel and cargo were yesterday cleared.

He expressed the authority’s commitment to clearing the backlog of consignments at the border as soon as possible.

Note that truck drivers had gone on strike after the government of Uganda directed for mandatory covid19 tests at USD30(100,000Ushs).

The strike has since been called off after a council of ministers of the East African Community agreed to 7 days of cost free covid19 tests at both the Busia and Malaba border points.