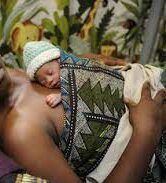 Expectant mother chased out of Hospital for failure to pay 50,000Ushs.

Police and district officials in Ntungamo are investigating circumstances under which a 21-year-old mother delivered a baby from the gate at Kitwe Health Centre IV.

It is reported that Anita Mushiwimana who expected to give birth one week later felt labor pains on Saturday evening.

At about 8.30pm, she moved to Kitwe Health Centre IV where she was allegedly asked to pay 50,000Ushs by the midwife, Juliet Uwamurera.

It is reported that Uwamurere who was the only medical officer around, said she would not touch her unless they gave her the money she was asking for and later ordered them to leave the maternity ward for failing to pay.

Mushiwimana’s mother, Ms Veneranda Mukaturasinze said after about an hour of pleading, they walked out when they realized the midwife was not moved.

She advised them to go to Itojo hospital where Mushiwimana would produce her first child from. Left without a choice, Mushiwimana heeded to the midwife’s advice and packed all her belongings and started to walk out but could not go beyond the health facility’s gate because the pain was too much. She sat at the gate for hours as her mother held her.

She later gave birth to a baby girl with the help of her mother and some two casual labourers.