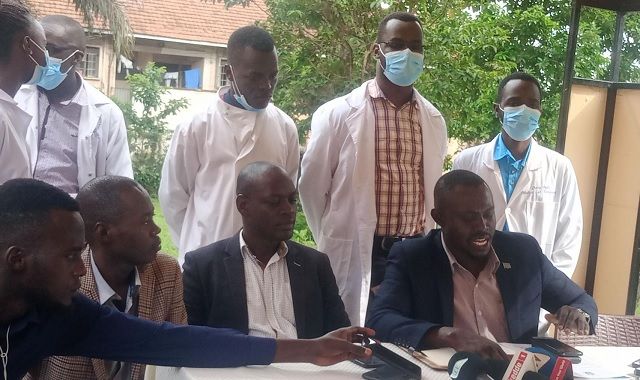 Over 10,000 laboratory technicians have today joined doctors and medical interns to lay down tools over various grievances including low salaries, poor working conditions among others. This first-ever strike also involves technicians working in blood banks and the six government reference laboratories.

Following an address they made to the media yesterday, the laboratory technicians under their umbrella body, Uganda Medical Laboratory Technology Association (UMLTA) said they had put the ministry of Public Service on notice over their intended strike three weeks ago, but they didn’t get feedback prompting them to lay down tools.

The laboratory professionals told journalists that their efforts to serve in the health sector haven’t been recognized by government, that even as many of them have advanced in their studies to attain degrees and PhDs, government still gives them an entry salary of Shs1.2million.

Patrick Dennis Alibu, UMLTA secretary-general made reference to a letter that they had written on 29th November 2021 directly addressed to the honourable minister of Public Service with copies given to the ministry of Health requesting government to pay attention to their grievances.

Alibu added that while the interns’ strike was going on, they were told they held in-house meetings but never got any feedback from the ministry of Public Service whom they had directed the letter to. Alibu said that the strike was their last resort.

Alibu says even though many of his colleagues went back to study when Makerere University started degree courses in 1998 followed by Mbarara University of Science and Technology (MUST) in 2000 the money they earn is the same as that earned by diploma holders and lab assistants whose take-home salary is Shs 800,000.

For him, if degree holders are recognized by accounting officers, then they would be earning around the same as medical officers who are currently earning a gross salary of Shs 3 million and are in industrial action to have their salary enhanced to Shs 5 million.

Despite their circular being sent out to accounting officers in 2019 to provide for recruitment of degree holders it hasn’t happened. The medical laboratory officials who are in their first-ever industrial action are also asking that their focal persons in local governments be elevated to the same level as district health officers to be able to manage the dynamics of laboratory services that come with the emergence of new pathogens and diseases like the hemorrhagic fevers and COVID-19.